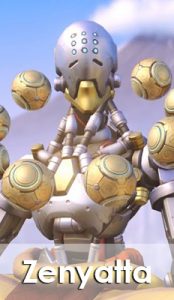 One of the most loved Overwatch 1 characters of all, Zenyatta is officially a Overwatch 2 character now. There’s a lot about the enlightening Omnic to love, which is why Zenyatta is in Overwatch 2 despite not being a huge story presence. Here’s what we know about Overwatch 2 hero Zenyatta up until now.

Zenyatta in Story
When it was revealed that every single character will have their own missions in Overwatch 2, it must be said that some of the most excited to hear this news were all those that play Zenyatta. There has been barely any lore shared about Overwatch 2’s Zenyatta, but it is very likely that this will change with the story missions. We’ll finally get a view on things from Zenyatta’s side, and it is possible that we’ll get to learn much more about his backstory as well. How he’ll be effecting the main storyline is yet to be seen though, which is another thing to look forward to regarding Overwatch 2.