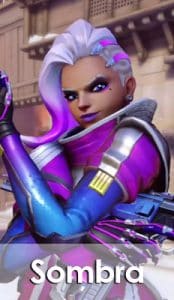 One of the 32 heroes in Overwatch 1, Sombra is in Overwatch 2, the awaited sequel which was announced in 2019. She was one of the characters added to the world after the launch of the first game, and now Sombra is an Overwatch 2 character as well. Here’s all that you need to know about Overwatch 2’s Sombra, including important information such as the role you can expect her to play in the story missions and Sombra’s Overwatch 2 abilities as well.

Gameplay
In a literal sense, Overwatch 2 hero Sombra will have all the same abilities that she had in the first game. Blizzard has confirmed that there won’t be any huge changes such as completely new abilities, but there is set to be another kind of huge change that has been confirmed. This change is for Overwatch 2 hero Sombra and all other playable characters in the game, and is known as Talents. Talents are a new mechanic which will upgrade the existing abilities of Overwatch 2’s Sombra and other playable characters in the game. But it’s something that we’ll only be seeing in PvE Hero/Story missions, meaning that Sombra’s PvP gameplay will probably stay the same.

Sombra – Story
While there hasn’t been any official confirmation regarding the matter, it is possible that Sombra could be playing a much bigger role in the story than anyone expects. She is shown to be a member of Talon, the main antagonist group. She is a very skilled hacker, and seems like a childish, goofy character. But in reality, it was revealed in her cinematic short that she’s probably only using Talon’s resources for personal gain and is after something much bigger.

Overwatch 2 character Sombra’s plan and true intentions could be revealed once the game launches, and it might turn out that she’s a much greater threat to Overwatch than they had expected. We’ll surely be seeing her in Overwatch 2’s story missions, and all our questions will be answered when that happens.