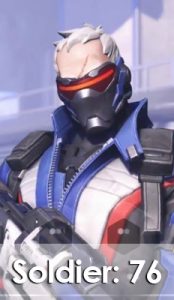 Soldier: 76 is arguably one of the best parts of the entirety of Overwatch 1. His character is very well written, his story and dialogue are great, and he is one of the easiest heroes to play which is why he is a very popular pick. All this is enough to make it obvious that Soldier:76 will be in Overwatch 2. Read below if you wish to learn more about him in the sequel, such as Soldier: 76’s new abilities in Overwatch 2 and his potentially huge impact on the story.

Major Differences
Overwatch 2’s Soldier: 76 is primarily going to be quite similar to his Overwatch 1 counterpart, minus a few changes. There’s going to be new Overwatch 2 abilities for Soldier: 76 called Talents. Every character has them, and it’s very interesting to see what they all are. But sadly that isn’t possible with Soldier for the time being because his Talents haven’t been revealed to players yet. Overwatch 2 hero Soldier: 76 has surprisingly been missing from all trailers and other footage as well. Overwatch 2-character Soldier: 76 will be getting a completely new design as well, perhaps one that might make him look even older than he already looks, like Reinhardt’s new design.

Story Impact of Soldier: 76 in Overwatch 2
Overwatch 2 character Soldier: 76 was basically the leader of the entire Overwatch organization before it all went wrong and the organization was disbanded. He arguably has the biggest bone of all to pick against Talon and especially Reaper. He is lined up to play a huge role in the Overwatch 2 story and he probably should as that is what most fans want, as well as a potential showdown between Overwatch 2 hero Soldier: 76 and Reaper. Soldier: 76 said he has completely left behind his Overwatch life in dialogue and his own cinematic short, but we’ll see whether or not that’s actually true in his story missions when Overwatch 2 finally arrives.