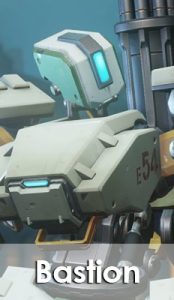 Bastion is an Overwatch 2 hero that was also featured in the previous game. It is by far one of the most hated characters in the original game, and this has nothing to do with its backstory. It is all entirely because of its gameplay and how overpowered it feels. The deadly Omnic with a seemingly charming personality will be returning for Overwatch 2. Here’s what we know for sure about Bastion in Overwatch 2.

Bastion Overwatch 2 Abilities
Despite many fans hoping for a complete rework on Overwatch 2’s Bastion to make it different than it is right now, but it doesn’t look like that’s happening. Developers confirmed that everyone will have the same abilities and basic gameplay that they had in Overwatch 1, meaning that Overwatch 2 character Bastion won’t be getting any major changes in that aspect. Bastion will be getting a lot of changes to its gameplay in the player vs enemy mode though, that is for sure. These Overwatch 2 Bastion abilities will probably be based around its current abilities but with added twists and customization. We also know that we will be able to upgrade Bastion’s Overwatch 2 PvE mode abilities.

Bastion in Story Missions
Based on its lore, you could say that Bastion is pretty much a neutral character as it isn’t a part of Talon or Overwatch. But we do know that Overwatch 2’s character Bastion greatly loves nature and its bird friend known as Ganymede. It is possible that Bastion might fight for Overwatch after seeing all the destruction Talon is causing to the world, and we already know that Bastion is very friendly with protagonist characters in Overwatch while being mainly hostile against antagonist characters based on its dialogue. In short, its nature is mainly that of a protagonists and it is highly likely that it will be one of the good guys. We can only wait and see what Overwatch 2 hero Bastion has in store for us in its story missions when the game finally releases.