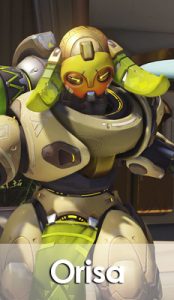 Orisa in officially an Overwatch 2 character as confirmed by Blizzard. She was added to Overwatch 1 more than a year after release and instantly became one of the most played tank characters in the game. Here’s what we know about Overwatch 2 hero Orisa so far ahead of the release of the game.

Orisa Gameplay Changes and More
Overwatch 2’s Orisa is primarily going to be a lot like Overwatch 1. Orisa abilities in Overwatch 2 are going to be the same as the one’s in the first game, at least for the multiplayer mode. But when it comes to story missions, that is an entirely different story. It is confirmed that Overwatch 2 will have a new mode which will focus on story, and everyone, including Overwatch 2’s character Orisa, will have new abilities called Talents which will make their existing abilities even better. Sadly, we still haven’t gotten any news about these new talents of Orisa in Overwatch 2. We also haven’t even able to get a look at her new design, if she even has one.

Role in the Story
While we may not know much about Orisa’s new abilities in Overwatch 2 (Talents), it is pretty easy to guess what her role in the story might be. She is a robot that was programmed with the sole purpose of protecting all those that need help. With the Omnics and potentially even Talon now attacking the world, Overwatch 2 hero Orisa will probably lend her hand to the Overwatch 2 organization and help them clear out these threats.

This isn’t confirmed though, so Blizzard could potentially surprise us with a new twist regarding Overwatch 2’s character Orisa. But that is quite unlikely, and it seems like the above-mentioned will probably be her role in the sequel’s story missions.