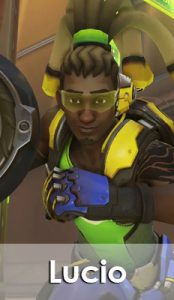 Overwatch 2 hero Lucio is by far one of the most popular characters from the game, and it’s all thanks to him being one of the most unique characters that the game has to offer. His personality is amazing and comedic, his gameplay is very fun, and he’s loved by pretty much anyone that plays Overwatch. When you know all this, there’s absolutely no surprise that the DJ is making a comeback in Overwatch 2. Now that his presence in the game has been confirmed, here’s what we know about Lucio in Overwatch 2 based on confirmed info.

Lucio’s New Abilities and Other Changes
All the characters in Overwatch are getting major changes made to them, and this includes Overwatch 2 hero Lucio. These major changes are the new Talent system which can only be used in Overwatch 2 story missions. This means that Lucio’s Overwatch 2 abilities will be even better in said missions. While we’ve only been able to see the confirmed talents of only a handful of heroes, Overwatch 2 character Lucio is luckily one of them.

Although not official, his talents have been leaked. They include all sorts of different abilities for Lucio in Overwatch 2, including a mashup ability which allows him to play both his speed boost and healing boost song at once. There’s also the Healing Wave which Overwatch 2’s Lucio can use to heal allies for 25% over their maximum health if they’re already at full health. Other talents of his include Beat Matching, Accelerando, Power Skating etc. which are unlocked by levelling up as Lucio.

Story Relevance
Thanks to official gameplay videos of the game, we now know exactly what Overwatch 2 character Lucio’s role in the story missions is going to be. The popular DJ has been known for defending his home when it counts, and in Overwatch 2, he’ll be teaming up with Overwatch to defend his home and the world in general against the great threat posed by the Omnics and Talon as well.