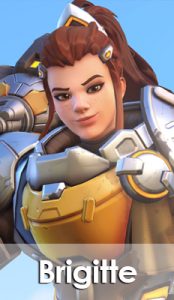 A sequel to Overwatch has been announced and one of the characters that players got to see in the announcement character was Overwatch 2’s Brigitte. Brigitte was one of the heroes added to Overwatch 1 after the game’s launch and she is now confirmed for Overwatch 2 as well. Much is known about Overwatch 2 hero Brigitte, and here’s a small summary of it.

All her Abilities in Overwatch 2
Brigitte in Overwatch 2 is arguably the character which we can expect most to be reworked. Ever since she was made available in Overwatch 1, Overwatch 2 character Brigitte has gotten nothing but nerfed, but she is still arguably quite powerful despite this. Some players speculate that the developers might think that reworking her entirely is the only option which is why Overwatch 2’s Brigitte abilities could end up being totally different as compared to her current ones in the original. As the multiplayer between Overwatch 1 and 2 will be shared, the changes will be implemented in the original as well.

But then again, nothing is confirmed and she will retain all the same abilities that she has right now unless she is reworked ahead of the release of Overwatch 2. In short, Brigitte’s abilities in Overwatch 2 are set to be the same as they are in the original unless she gets reworked.

Brigitte’s Part in the Overwatch 2 Story
One thing that we definitely know for sure is that Overwatch 2 hero Brigitte will definitely be a main character in the grand scheme of the story. She is the daughter of Torbjorn and pupil of Reinhardt, and she has followed in both their steps and joined Overwatch as we say in the Overwatch 2 trailer. You can bet that she’ll be featured in most of the Overwatch related story missions, meaning that there’s much in store for Overwatch 2 character Brigitte in the sequel when it arrives.