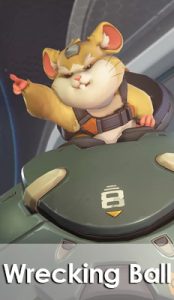 We’ll hopefully get to learn more about these Talents of Wrecking Ball in Overwatch 2 much sooner rather than later. Information about how these Talents will change Hammond’s abilities is exactly what his mains have been waiting for since the mechanic was announced.

Wrecking Ball – Story
Overwatch 2 hero Wrecking Ball was just one of the animals in Horizon Lunar Colony on the moon alongside Winston. He made his way to Earth, but he hasn’t been shown to be interested in joining either Overwatch or Talon. We do know that he is friendlier with Winston compared to most other characters, so there’s a chance that Hammond could lend him and Overwatch a hand when they need it. That is presumed to be his role in the story missions, but we will only get to know for sure when the game finally releases.