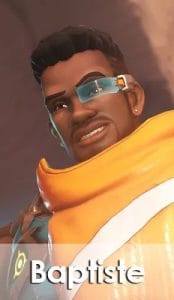 One of the Overwatch 2 characters is Baptiste, who is also one of the newest characters in all of Overwatch. He was added to the game quite recently as compared to most others on the roster, which is why Baptiste being an Overwatch 2 character is absolutely not a surprise. He wasn’t exactly the most loved character when he was first made available to players, but as more and more lore of him released and changes were made to his gameplay, he became one of the fan favorites. Here’s everything we know about Baptiste as an Overwatch 2 hero.

These weren’t available in Overwatch 1 as there were no PvE story missions involving Baptiste, but they will definitely be there in Overwatch 2. What these abilities are going to be is still to be seen.

Baptiste in Overwatch 2 Story
We may not know about it so far, but Baptiste could turn out to be one of the most influential characters in Overwatch 2’s story. Baptiste in Overwatch 2 could actually end up joining Overwatch, as teased in his lore. Overwatch 2’s Baptiste has always been a loving character that only wishes to help good people, as evident from his dialogue. Because of this, he left Talon because of their evil ways and went on to become a vigilante-like figure that helps all those in need. He could eventually join Overwatch now that it has been reestablished so that he can take down Talon. But for now, Baptiste’s role and relevance to the Overwatch 2 story is yet to be seen.