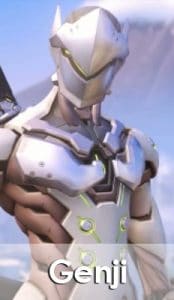 Genji is one of the most popular and important Overwatch characters, and is one half of the Shimada brother pair that is so infamous in the Overwatch world. Genji is by far one of the coolest characters in Overwatch, and a lot of people will agree with that statement. Everything about him is very likeable, from his gameplay to his story, and even his design. Genji has been confirmed as a playable Overwatch 2 character and is one of the characters we saw in the game’s trailers. Here’s what we know about Overwatch 2’s Genji so far.

One of his new abilities have been confirmed and players even got to see it in action. This ability is his new ‘Dragon’s Breath’. It allows Overwatch 2 hero Genji to send out a highly powerful projectile in a straight line through his sword slashes and is exclusive to him in the story missions, meaning it will probably never make it to multiplayer. That is all we know for sure so far about Overwatch 2 character Genji and his new abilities.

Story Mode
Genji was one of the members of Overwatch before it got disbanded, and he is now a member again after it got reestablished in the announcement trailer. We’ve already seen footage of his gameplay in the gameplay trailer and it has been confirmed that he’ll be playing a big part. So, all mains of Overwatch 2 hero Genji can rejoice as he will certainly be getting a lot of screen time and at least one very cool new ability as well!