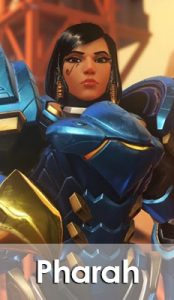 Gameplay and Abilities
There are set to be a lot of changes made to Pharah’s abilities in Overwatch 2, but these changes aren’t going to available in multiplayer. They are a story mission-only feature and are called Talents. They’re a great addition in the upcoming sequel to Overwatch and every character, including Overwatch 2 character Pharah, will have them. Blizzard hasn’t dwelled too much into the details of Pharah’s talents at all though, so we’re going to have to wait a while to truly learn about all the changes being made to her gameplay in the PvE mode.

Pharah – Story
Overwatch 2 hero Pharah is the daughter of one of the ex-Overwatch leaders and commanders Ana Amari, a separate support hero in Overwatch. She was surprisingly missing from both the gameplay and announcement trailers. Based on her lore and interactions, it’s obvious that Overwatch 2 hero Pharah has always wanted to be a part of Overwatch and help people, but was never able to do the former as Overwatch was disbanded.

But now that we’ve seen Overwatch reformed in the Overwatch 2 announcement trailer, it is likely that Pharah will opt to join them and protect the people of the world. Overwatch 2’s Pharah is likely to be one of the characters to get the most development once the sequel releases and there’s no doubt she’ll be one of the good guys.