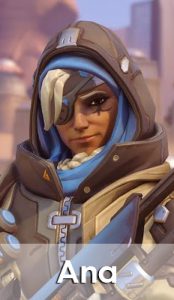 Ana is an Overwatch 2 hero and is definitely one of the main characters of the game when you look at the lore. She was one of the higher ups in Overwatch before the organization was disbanded. Her mysterious and very intriguing past make her one of the most interesting characters in the entire game. She plays a big role in the grand scheme of things, and as Overwatch 2 will be focused on exploring the story of the game’s world rather than only multiplayer, it only makes sense that Ana will be an Overwatch 2 character. Here is everything you need to know about Ana from Overwatch 2.

Gameplay and Abilities
Overwatch 2’s Ana will retain her basic gameplay from the first game. This also means that Ana’s Overwatch 2 abilities will be the same as her abilities from the first game. The first and most important of course is her primary weapon, the popular Biotic Rifle. This weapon is what makes Ana a character with truly unique gameplay, as she does more than use this rifle to only damage her enemies.

She can even shoot teammates, but instead of doing damage to them she’ll actually be healing them with it as long as they’re on the same team.

One of Overwatch 2’s Ana’s abilities is also her grenade, which follows the same concept as her gun. If it hits enemies, it will damage them, and if it hits allies, it will heal them. Her annoying to face sleep dart will be one of the abilities of Overwatch 2 hero Ana. Her Nano-Boost ultimate will obviously be in the game as well. On top of all of this, Overwatch 2 character Ana will also have many new abilities that will be exclusive to the PvE mode, but what these abilities are going to be isn’t confirmed so far.