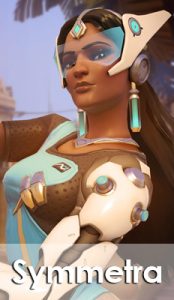 Overwatch 2’s Symmetra was one of the stranger characters in Overwatch 1. Not because of her backstory or personality, but because of how Blizzard handled her balancing and changes. She is one of the only heroes of the game to have gotten completely reworked so far, and Overwatch 2 hero Symmetra’s changes were arguably for the better. Here’s a short information of what we know about her inclusion in the sequel, including Symmetra’s Overwatch 2 abilities and other important things.

Symmetra’s Overwatch 2 Gameplay
There has been some gameplay footage revealed for a few characters in the upcoming sequel to Overwatch 1, but Overwatch 2 character Symmetra is not one of them. Players do know for sure though that Symmetra’ Overwatch 2 abilities aren’t going to be too different from the first game in PvP multiplayer mode. She will retain the same abilities in pretty much every mode confirmed right now, but the only difference is that these abilities will be a lot more fun in PvE missions thanks to the Talent mechanic.

This is a PvE thing only and is for the abilities of every hero in the game, including Overwatch 2 hero Symmetra. But Symmetra’s exact talents still haven’t been confirmed, so can’t get too excited about them.

Symmetra – Story
A lot of people are actually very surprised to see Symmetra in Overwatch 2, as she’s the furthest from being a part of either Overwatch or Talon. Regardless, she’s been confirmed to be in the game and will have her own story missions. As we saw, there were attacks going on in Rio in one of the gameplay trailers, and Overwatch 2 character Symmetra’s company mainly operates here. This means that we can probably expect to see her in action in Rio defending herself and her work, or something similar. We’ll be able to see exactly how she’s involved in the story when the game releases.