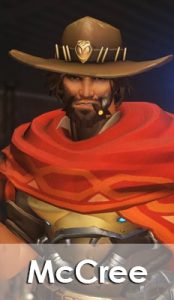 Overwatch 2’s is undoubtedly one of the most popular characters from the game, and there’s lots of great reasons for that. The cowboy is confirmed to return for the sequel and will be a playable character for sure. With that being said, here’s everything we know about Overwatch 2 character McCree.

His New Abilities and Other Changes
One of the things which made Overwatch 2 hero McCree so popular in the first game were his simple yet great abilities. These McCree abilities will be in Overwatch 2 as well, as the multiplayer is hardly getting any changes to gameplay. The real change is the story missions, in which Overwatch 2’s character McCree as well as all others will be receiving new abilities called Talents. Unfortunately, there aren’t any specifics about the talents of McCree so we know nothing about what they are and how they’ll effect his gameplay in story missions. There’s a chance we might get to learn more about the new talents and abilities of Overwatch 2’s McCree in any potential gameplay videos or clips we might get to see ahead of the release of the game.

But now it’s been confirmed that there will be story missions where Overwatch 2’s McCree will be the main focus, so it is likely that he might have had to return to Overwatch at some point sooner or later following the tensions of war rising between Omnics and humans once again. For now, we can only speculate what Jesse McCree’s story presence will be, but sooner or later, our questions will finally be answered.