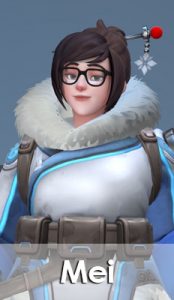 Many players hate to go against her but that doesn’t mean that Mei is going anywhere anytime soon. Mei is in Overwatch 2, and we already know that she’ll be playing a relatively big role in the grand scheme of the story. Here’s everything we know so far about Overwatch 2 hero Mei.

Mei’s new Overwatch 2 abilities, otherwise known as Talents, include lots of things. For example, there is her Cold Snap which instantly freezes any nearby enemies when Cryo-Freeze comes to an end.

also the Snowball Effect ability that Overwatch 2’s Mei has which allows her to move even during her Cryo-Freeze state. The Cryo-Freeze is one of her most annoying and powerful abilities, and it is about to get even better thanks to these new talents.

There’s also her new Frostbite talent which makes frozen enemies take a lot more damage than usual. Overwatch 2 hero Mei also has her new Shatter talent which causes frozen enemies to shatter and damage other nearby enemies upon death. She also has a new Hypothermia talent which instantly kills all frozen enemies under 200 health. Up last is her Polar Vortex which allows her Blizzard to cover much larger areas. All these new talents are surely amazing and Mei mains surely can’t wait to start using them in PvE missions.

Mei in Story Missions
Overwatch 2 character Mei was always a part of Overwatch, but she only helped with research before it was disbanded. Now it has been confirmed that she will be taking part in fights as well and helping her Overwatch allies in battle against Talon and rogue Omnics. All in all, it’s safe to say that she’ll be one of the more important characters in the overall story of the game.