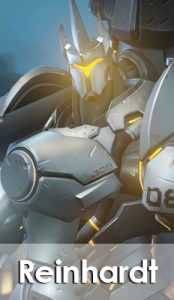 The veteran crusader Reinhardt is in Overwatch 2 as a playable character just as he was in the first game. Here’s everything important in the sequel that you need to know about him, including all the information on Reinhardt’s new abilities in Overwatch 2.

New Talents and Design
The new abilities of Reinhardt in Overwatch 2 called Talents have been revealed and showcased to the public. The main one is his Epicenter, which effects his Earth Shatter ultimate. Instead of going in one direction, Overwatch 2 character Reinhardt’s ultimate now travels in all directions when this Talent is active. There’s his Frenzy talent which makes his Hammer swings faster with each hit in a row.

Another one of the Overwatch 2 Reinhardt talents is the Balderich’s Stand, named after Reinhardt’s late friend. This Talent gives him added health and armor when his barrier breaks.

There’s the Amplification Field which increases the damage of all ally attacks that pass through his barrier. The Impact Converter Talent which recharges his barrier with each hit with his hammer. There’s the Fire Burst which makes Fire Strike explode on impact with enemies, dealing damage to other nearby enemies as well. Last of them all is Fault Line, Overwatch 2 hero Reinhardt’s Talent which makes Earth Shatter deal much more damage in a much narrower cone. Other than all of this, his new design was also revealed which shows him as an even older man than he was in Overwatch 1.

Role in Story
Overwatch 2 character Reinhardt was one of the many members of Overwatch before it was disbanded. As shown in the trailer, he has answered Winston’s recall and has become a member of Overwatch yet again. He will be guiding the new and few members of Overwatch in battle as they take on Talon and the Omnics that are attacking all over the world, as also shown in the announcement trailer. He’ll surely be playing one of the bigger roles in Overwatch’s fight to save the world from all major threats.